Click on each study to view via direct link.

1.   Homeopathic Nux vomica & Calendula are potent inhibitors of H. pylori for the treatment of human gastritis.

3.   It is possible to record the response of homeopathic medicines on physiologic parameters of the human autonomic nervous system.

6.   With classical homoeopathic treatment "patients with psoriasis improved in symptoms and quality of life."

7.   A case series: Treatment with homeopathy for premenstrual syndrome (PMS) "seemed to have a positive impact on PMS symptoms".

9.   When the usual conventional treatment failed, properly prescribed homeopathy was able to cure this severe case of nasal aspergillosis in a 6 y.o. dog

10.   Study concludes that homeopathic Thymulin 5cH could be a viable method to improve productivity in poultry production. Agrohomeopathy.

12.   Homeopathic treatment to promote peripheral nerve regeneration in rats was "faster & clearly more positive" than in the control group.

13.   Study proves homeopathy "can be used as a complement to conventional anti-tubercular treatment with beneficial results".

14.   The use of homeopathic treatment for tonsillitis revealed both a subjective & objective "significant decrease in symptoms".

17.   Homeopathic Crotalus horridus 200C proved as effective as Dimiazine in the treatment of tick-borne Babesiosis in dogs.

19.   Professor Edzard Ernst concludes "the evidence supports the use of homeopathic remedies over placebo in osteoarthritis & rheumatoid arthritis".

20.   Further demonstrations in homeopathic research with animal models that there are "biological effects of homeopathy".

22.   The homeopathic remedy Tarantula cubensis was able to partially neutralize the deleterious effects of Aflatoxin effects in rats

23.   This study concludes the "use of homeopathy may be able to treat a considerable number multi-morbid patients at lower costs than conventional medicine".

25.   Proof that homeopathy is more effective for treatment of children with sub-clinical hypothyroidism with & without autoimmune thyroiditis.

26.   Homeopathic "Lappa has shown positive effects in the treatment of acne (vulgaris) especially the inflammatory type."

30.   "Homeopathic B. vulgaris has strong anti-urolithiasis potential at an ultra-diluted dose."

31.   Use of homeopathy for otitis media with effusion shows decreased antibiotic use in children and It's COST EFFECTIVE.

37.   Proof that physiotherapy & homeopathy were more effective than placebo for lower back pain due to osteoarthritis.

38.   Proof that homeopathy can replace the use of antibiotics. "Piglets of the homeopathic treated group had significantly less E. coli diarrhoea."

40.   For acute respiratory and ear complaints, with homeopathic treatment the "onset of improvement with homeopathy was faster."

42.   Homeopathic vs standard care for glue ear in children "antibiotic consumption was lower in the homoeopathy group."

43.   Antibiotic use for infectious diseases in pigs is of concern to consumers. This study proved that that homeopathy was more effective.

44.   In a study of childhood acute otitis media, the homeopathy treated group had less pain, recovered faster and had fewer relapses.

45.   Proof that patients with Xerostomia (dry mouth) did better with homeopathy which "could be a valuable adjunct."

47.   There was a "trend towards less narcotic use in the homeopathy treated group of young patients with mucositis" caused by chemotherapy.

50.   128 women w/ dysmenorrhea experienced improvement with homeopathy and the "use of other health services decreased."

51.   For motility-related variables, there was a trend toward superiority of homeopathy for acute symptomatic tendinopathy.

52.   Homeopathy had maximal anti-inflammatory effect for the treatment of inflammatory periodontal diseases.

56.   Of 455 patients treated via homeopathy, 32.5% stopped or substantially reduced their conventional drug use.

57.   In France family physicians are main source of information on homeopathy to treat side effects of chemotherapy in children.

58.   "Sweeping statements about the scientific impossibility of homeopathy are themselves unscientific."

61.   Patients with influenza-like syndromes treated via homeopathy recovered in less time than the placebo treated group.

63.   90% of patients treated for acute rhinosinusitis via homeopathy were symptom free; whereas the placebo group had no change.

65.   Anti homeopathy political activists won't understand this, but homeopaths & their cured patients will.

66.   Confirmation by CT (computed tomography), homeopathic remedies where shown to increase bone mineralization in chickens. Will this be applicable to osteoporosis in the elderly?

68.   Homeopathic Passiflora Compose could be an alternative to psychotropic drugs for first intention treatment of anxiety & SDS.

71.   Treating pediatric tonsillo-pharyngitis via homeopathy could reduce the need for costly antibiotics.

72.   Homeopathic Symphytum officinale increases removal torque and radiographic bone density around titanium implants in rats.
Posted by SAHC at 6:32 AM No comments: 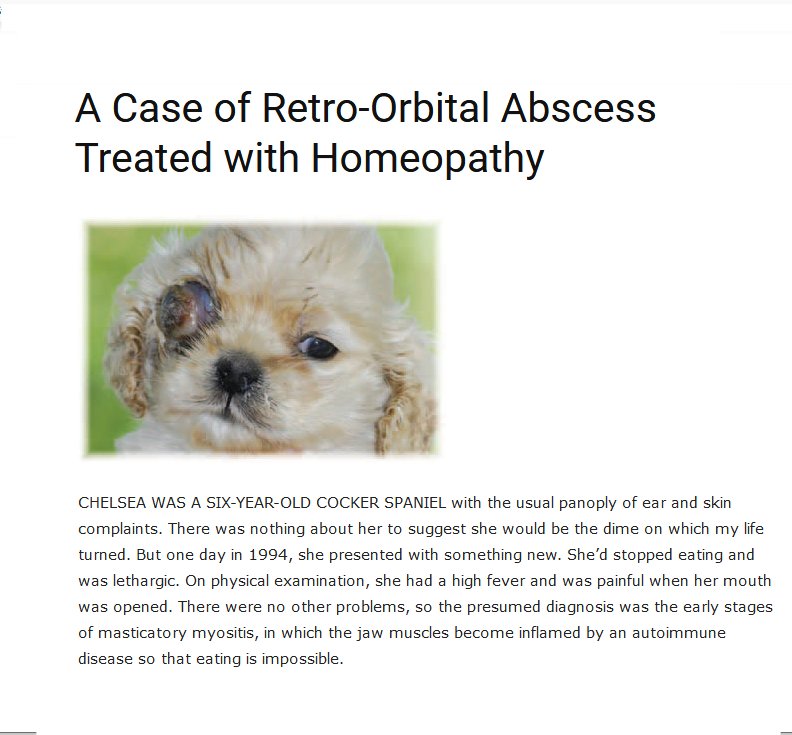 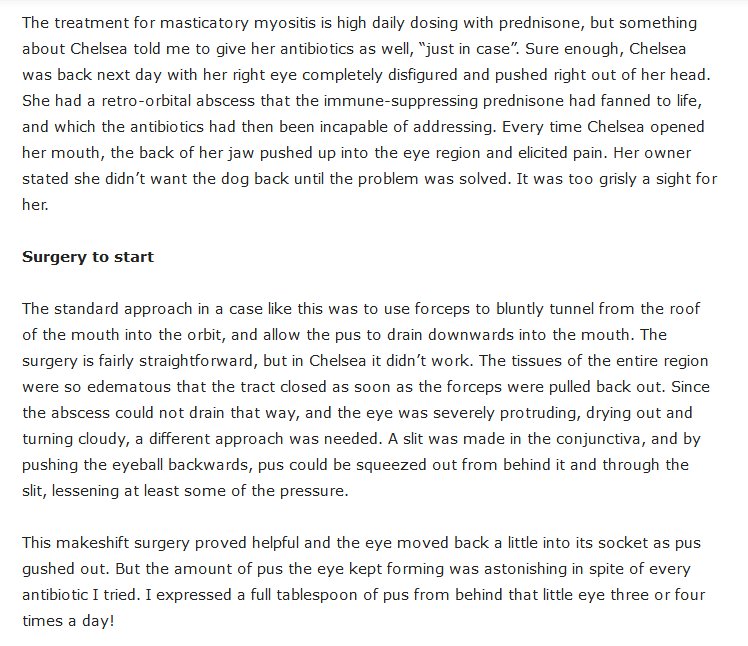 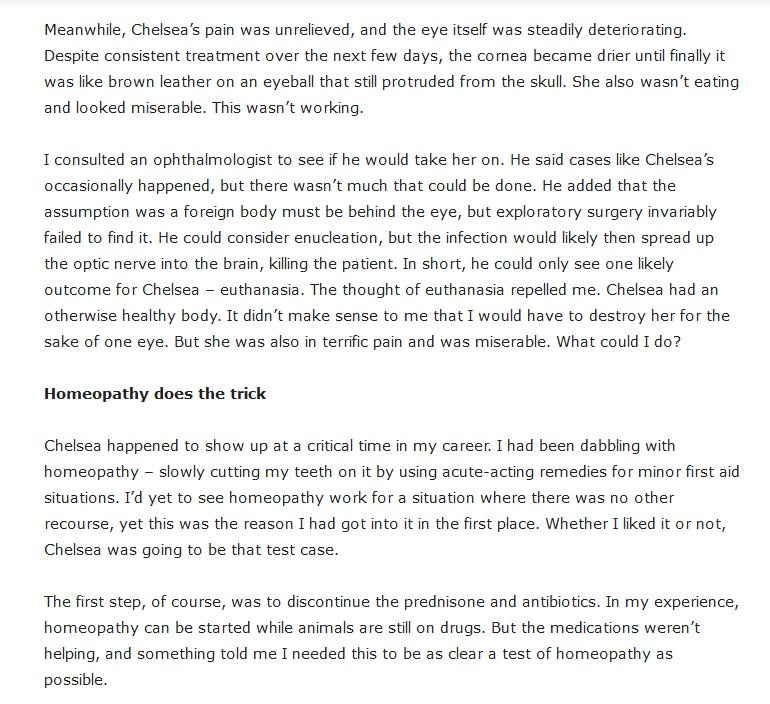 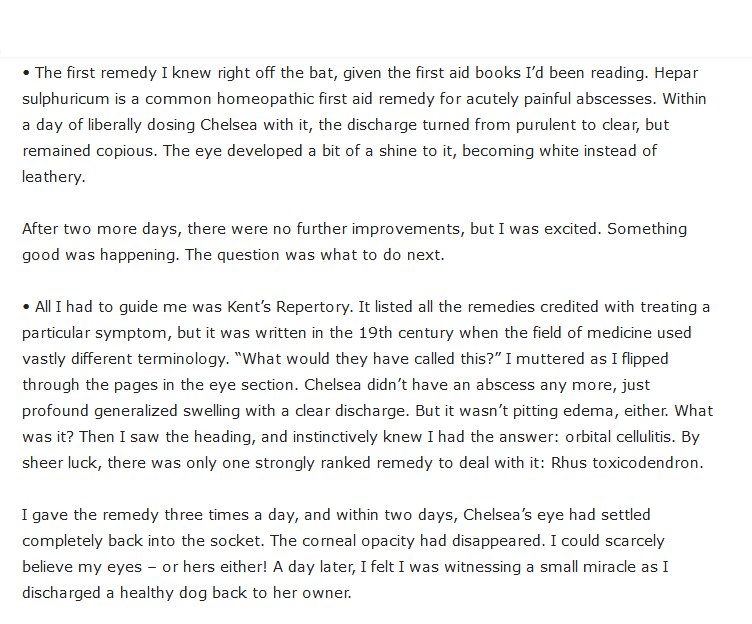 The author's case report is HERE
Posted by SAHC at 4:16 PM No comments:

This Cocker Spaniel was Lucky that Homeopathy Worked

The author's images below were copied from this article.


The Science based medicine effort & blog by Yale School of Medicine neurologist (and anti homeopathy activist) Steven Novella celebrated its 10 year online anniversary recently. Rather than rejoice about the 10 year effort to stop the use and growing interest in homeopathy, Novella is unable to celebrate and proceeds to tell his devotees why not.

1.   The organization has no major sponsors. "After several tries, no ad services were compatible with our editorial policy." Support now needs to come from donations, so there is now a "support" button.

2.   The "forces" against SBM are "highly profitable". The supplement industry has "billions" of dollar. Information about homeopathy and integrative medicine are "infiltrating" medical schools. State & local governmental legislators are being lobbied to promote "quack-friendly" laws! ineicalare follarfollarsuIt is an unfortunate reality that the forces we are up against are extremely well-funded. Quackery, fraud, and snake-oil are highly profitable. The billions of dollars generated by the supplement industry, homeopathy, and countless worthless health services and products have been funding several decades’ worth of concerted efforts to infiltrate pseudoscience into medical schools. These funds have been used to lobby state and federal governments for quack-friendly laws. They have been used to market a narrative of medical pseudoscience to the public, fostering a distrust of genuine expertise, and promoting conspiracy theories and blatant misinformation. They have literally millions of times more funding than we do. There is no profit in defending science and critical thinking, in medicine or elsewhere. All of the SBM editors and contributors are volunteers. We actually sacrifice time we could be expending more profitably elsewhere to promote SBM. But we have learned how to accomplish a lot with a little.
Posted by SAHC at 5:00 PM No comments:

In case you've been curious about how Dr. Paul Morgan, appointed Sepsis lead on the Cardiff & Vale University Health Board spends his free time on Twitter, view his tweets (under his image) in one hour on 17 Jan, 2018. If you check his timeline, this activity (saving the world from homeopathic treatment one homeopath at a time) is a daily self-appointed task. 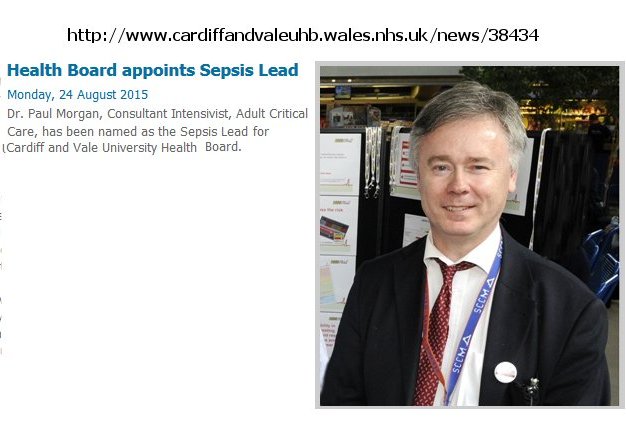 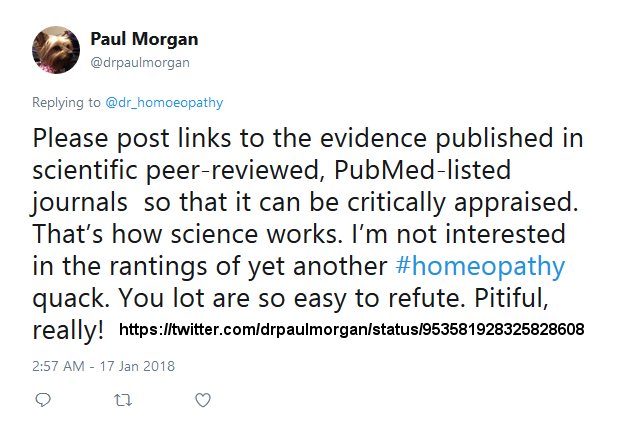 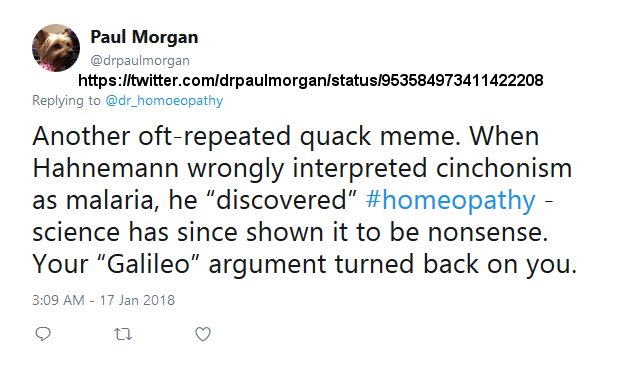 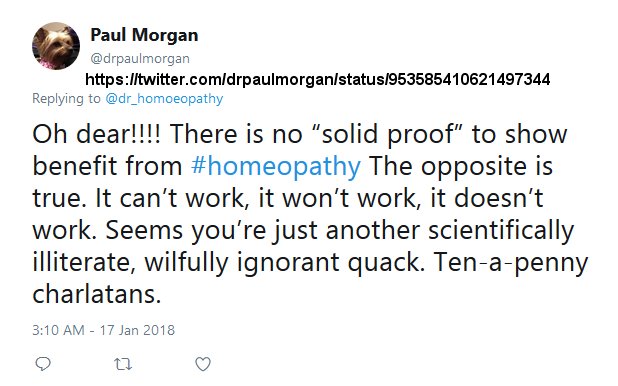 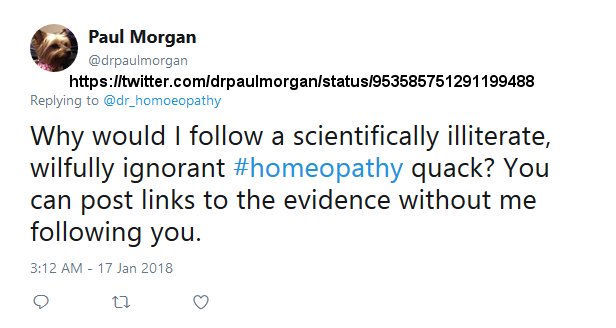 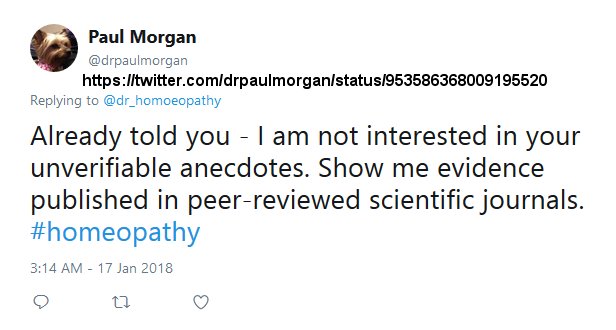 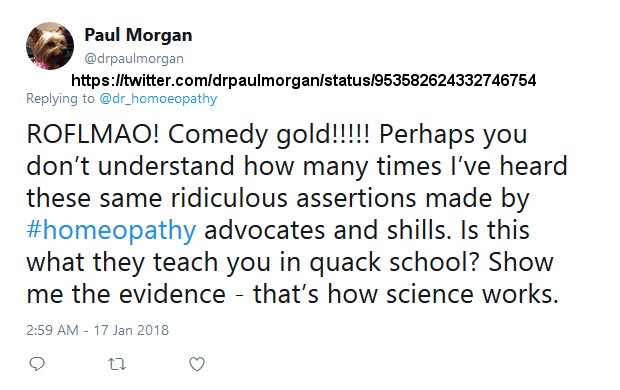 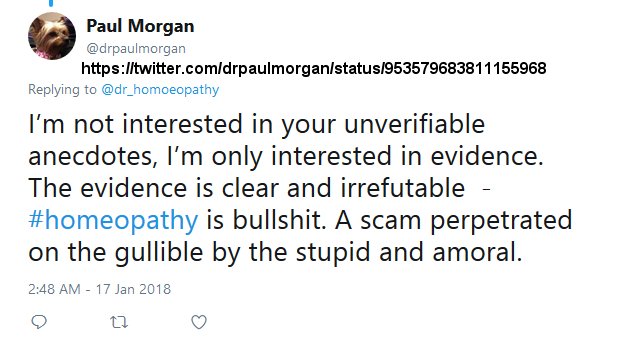 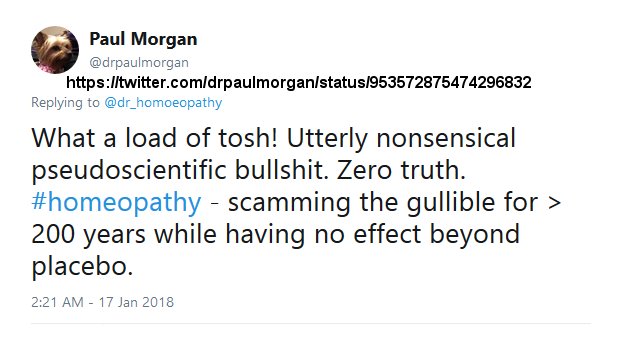 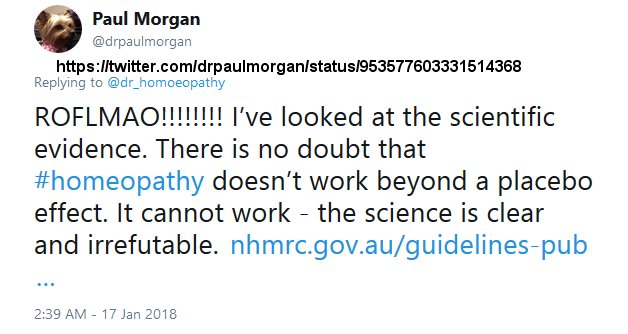 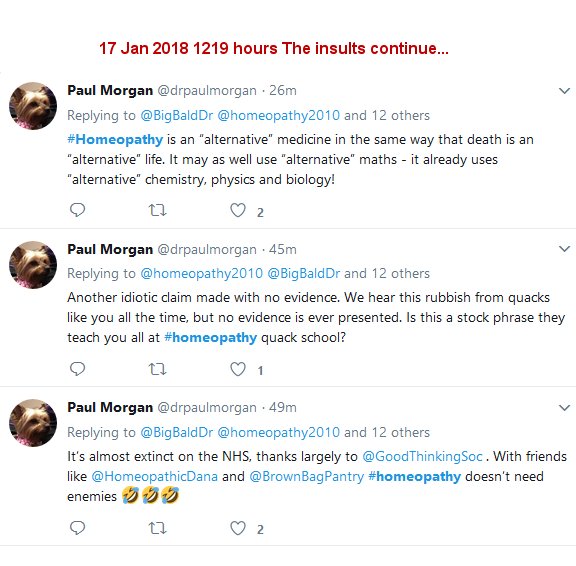 SO WHAT if homeopathy is not 'science based'

One of homeopathy skeptic Edzard Ernst's blog posts rhetorically asks "Time for the legal profession to have a serious look at homeopathy?"   Tuesday 15 January 2013

I think the opposing comment to Ernst's question by "Eco Witch" on 5/14/2015 deserves a wider audience.

“Science” says that homeopathic concentrations can not have an effect. So do the repeated rants of the author of this article. Well dear lawyers of the world and bigots united, please explain why even the US EPA recommended ‘safe’ concentration of arsenic in drinking water (which is 0.01 ppm)has an adverse impact on the blood lipids in sensitive mice and is resulting in proposals to reduce the concentration of arsenic in drinking water even lower than that already homeopathic dilution? According to the blinkered thinking about homeopathy, this level of arsenic in water shouldn’t be a problem - yet it is.

The science based approach has resulted the majority of people blindly believing that prescribed drugs will work for them and are safe. In fact over 90% of drugs work on only 30-50% of people taking them, ie they don’t work on up to 70% of people prescribed them but everyone risks side effects. (source: Glaxo’s Dr Allen Roses in 2003). It’s resulted in governments around the world wasting £Billions on Tamiflu. Indeed, even people NOT taking these damned drugs are adversely affected by them as they contaminate the drinking water in the world following excretion. Since our science based approach to life became the dogma of this society, our species has become the sickest on the planet within the life time of one generation. Why don’t you lawyers focus on these areas which causes greatest harm to the majority of people rather than focusing on the areas which adversely impact only a very few people?

Only those stupid enough to believe that humans have discovered all there is to know about the world and all the science there is to discover would always demand a ‘science based’ approach to all medicine. Science is only as good as the parameters set for it and the knowledge of the scientists concerned as well as the funding driving it.”

What's the Main Reason You Shouldn't Trust a Homeopathy Skeptic?

They don't have a family homeopath.